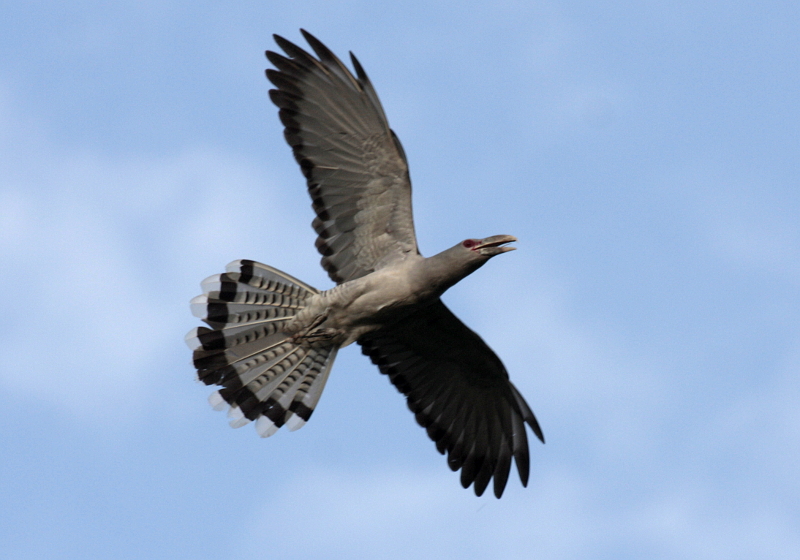 Today was a ‘hot-shocker’, apparently over 40° Celsius after lunch, fortunately Tania (the ‘home-owner’) had realized the consequences and put plenty of ‘bird-baths’ out. At around one PM, I was surprised to hear a Spectacled Monarch calling nearby and observed a nice adult bird arriving to ‘quench’ his thirst.

Soon more species arrived and I had 3 Little Wattlebirds, Lewin’s and Brown Honeyeaters, Pacific Emerald Dove and a pair of Australasian Figbird.

Unfortunately the species that I wanted to come and have a drink with me, were present in the garden but obviously not thirsty. Five Grey-crowned Babbler seemed to be more interested in ‘chatting-and-foraging’.

All was not lost however when another of our ‘regulars’, an Eastern Whipbird appeared, but it still had to wait a while while a Spangled Drongo refreshed itself.

Later, the Whipbird found one of the water-points in the back-yard and agreed to be filmed there instead.

Surprisingly the hot northerly winds changed to the south around 4 pm, it was certainly a ‘relief’ for me, and seemingly for the birds too as they stopped visiting almost immediately. Maybe this might encourage a new birding group on Facebook (Birdbath-Birding?) as I suspect there will be many more forty-degree days before this summer is over, and our wild birds will need all the assistance they can get to survive the heat. Take a look at the Ebird list and see what other species I recorded, also apologies for the poor-quality pics but the available light was very changeable (…and I’m not a ‘photographer’ either 😉 )